TNPSC Group – II & IIA Syllabus: Tamil Nadu Public Service Commission (TNPSC) will conduct the Combined Civil Services Examination-II (CCSE-II) in the state, for recruitment to eligible candidates under State Civil Services in Tamil Nadu. TNPSC Group 2 2022 notification for various vacancies will be released in the month of February 2022 and the exam will be in the last week of March 2022 or in the first week of April 2022. The candidates appearing for TNPSC Group 2 exam 2022 should be aware of the examination pattern of the exam and syllabus. We are providing the details of the TNPSC Group 2 Exam Dates and Syllabus. 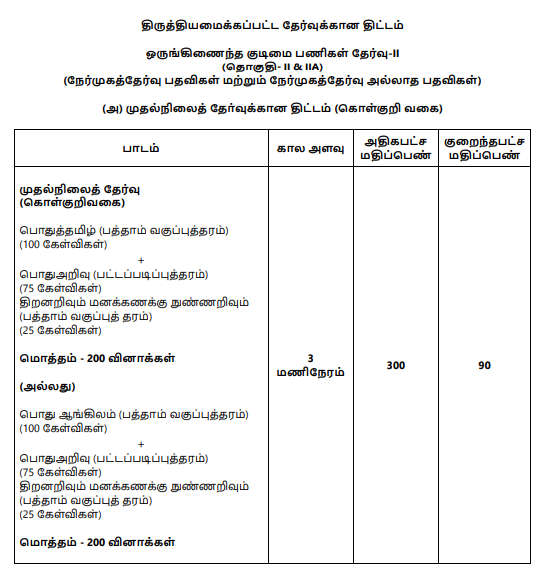 The applicants are allowed to answer the questions either fully in Tamil or fully in English. The Scheme of Examination and Syllabi for the Preliminary Examination and the Main Written Examination is available on the Commission’s Website at ‘www.tnpsc.gov.in’ and also below.

Unit-IV History and culture of India

Part-C: Authors and their Literary Works

I. Role and impact of science and Technology in the Development of India and Tamil Nadu.
Nature of universe‐General scientific laws‐Scientific instruments‐Inventions and discoveries ‐ Science glossary‐Physical quantities, standards and units ‐Mechanics and properties of matter‐ Force, motion and energy‐Heat, light and sound‐Magnetism, ‐electricity and electronics ‐
Elements and ‐compounds ‐Acids, bases and salts‐Oxidation, and reduction‐Carbon, nitrogen and their compounds‐Fertilizers ‐pesticides, insecticides ‐Main concepts of life science‐The cell ‐ the basic unit of life‐Classification of living organism‐Nutrition ‐and dietetics‐Respiration ‐Blood and blood –circulation‐Endocrine system‐Reproductive system‐Animals, plants, and human life‐ Govt. policy ‐organizations on Science and Technology‐Role, achievement & impact of Science and ‐technology‐Energy ‐ self-sufficiency ‐ oil exploration‐ Genetics ‐ the science of heredity‐ Environment, ecology, health and ‐hygiene, Biodiversity and its conservation‐Human diseases, prevention, and remedies‐Communicable diseases and non ‐ communicable diseases‐Alcoholism and Drug abuse‐ Computer ‐science and advancement

II. Administration of Union and States with special reference to Tamil Nadu
State government organization ‐ structure, functions, and control mechanism‐District administration ‐ role in people’s welfare-oriented programmes‐Industrial map of Tamil Nadu ‐‐ the role of state government‐Public Services ‐‐ the role of recruitment agencies‐State finance ‐ resources, budget and financial administration‐Use of IT in the administration ‐‐ e‐governance in the State‐Natural calamities – Disaster Management Union and State ‐Social welfare ‐ Government-sponsored schemes with reference to Tamil Nadu‐Relationship between State and Union‐Industrial map of India ‐Public Services ‐ the role of recruitment agencies in Union Government‐ Social welfare ‐ government-sponsored schemes by Government of India

Save Below Mobile Phone Number 9035800941 and
Send your District name from Whatsapp to receive Govt job notifications.